A long time supporter of the NSW Blues, this year The Star Sydney worked with 3D Printing Technician Shane van Stuivenberg from Cammpro to commission a lifesize 3D model of Blues mascot, Bruce the Blue Heeler. We caught up with Shane to talk about the 3D modelling process and whether Bruce was game-ready.

What started out as a hobby over 13 years ago, 3D printing is now Shane van Stuivenberg’s profession – and he loves it. So who better tasked to create the one and only, Bruce the Blue Heeler – iconic mascot of the NSW Blues NRL team?

Weighing roughly 15kgs and modelled off the actual Bruce the Blue Heeler dog, the 3D version of Bruce will belong to the NSW Blues fans and will go to events and training sessions – anywhere fans gather, Bruce will be there.

“People think 3D printing is exotic and out of reach, however it’s a sustainable, economic and timely form of manufacturing or making a prototype. It’s a lot quicker and more cost-effective than working with clay, paper mache, or working by hand!”

Shane adds that 3D printing is the perfect way to convert digital designs into physical objects, saying Cammpro can 3D print anything from medical prototypes to custom parts of vintage cars or even new products designed by inventors.

“Essentially, 3D printing is a manufacturing process that works by laying down thin layers of material in the form of liquid, powdered plastic, metal or cement, and then fusing the layers together to form a 3D object.”

Now back to Bruce. First things first, Shane and his team went to visit the actual Bruce the Blue Heeler, who’s living happily on a farm in Western Sydney, along with chickens, ducks and kelpie pups. Farmer Dave (of renowned Big Brother fame) is Bruce’s trainer. After meeting Bruce, Shane then completed a 3D scan of him using a specially designed scanner, which Shane says looks like an old telephone handset but bigger (don’t worry – it was harmless to Bruce). The whole scanning process took about an hour, and word on the street is that Bruce was a very well behaved boy throughout. Well, with a bit of help from his trainer, Dave.

“They say never work with animals or kids – but Bruce was very well behaved for a two year old pup – the best they come!”

Shane says they also took a lot of photographs to ensure they had captured Bruce perfectly.

Once back in Wollongong, Shane and the team then began to build the 3D model based on the scans and the photographs.

“It’s a lot of computer processing time – maybe 80 or so hours – to render the model.”

“Once the digital model is completed, it then goes into a software which breaks the model down into individual layers. The printer then runs off very thin layers of plastic, from the bottom up, and the software cuts the plastic in the shape that it needs to be.”

Shane says to think of 3D printing like there’s a million pieces of paper stuck together on top of each other to build an object.

While it’s a faster manufacturing process than some other methods, because Bruce is life size he still took around 100 hours, or four days, to be printed and completed.

“We can print in all shapes and sizes, colours and materials. But because Bruce is for the NSW Blues fans, we’ve printed him blue.”

Representing the NSW Blues and honouring the Super Blues Fans, Bruce is now a special – and immortal – part of the league community forever.

The Star Sydney is thrilled to have helped create a 3D version of Bruce the Blue Heeler – and is excited for fans to see him in person soon. To check out how to get a sighting of Bruce’s iconic new statue at the next NRL game, head to 24/7 Sports Bar. 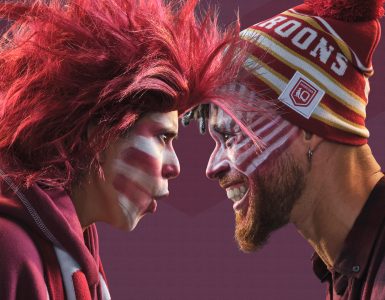 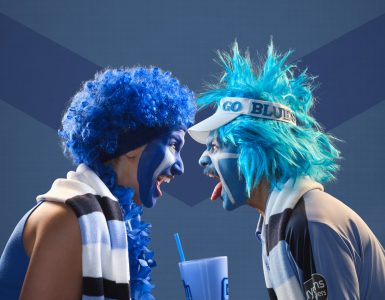