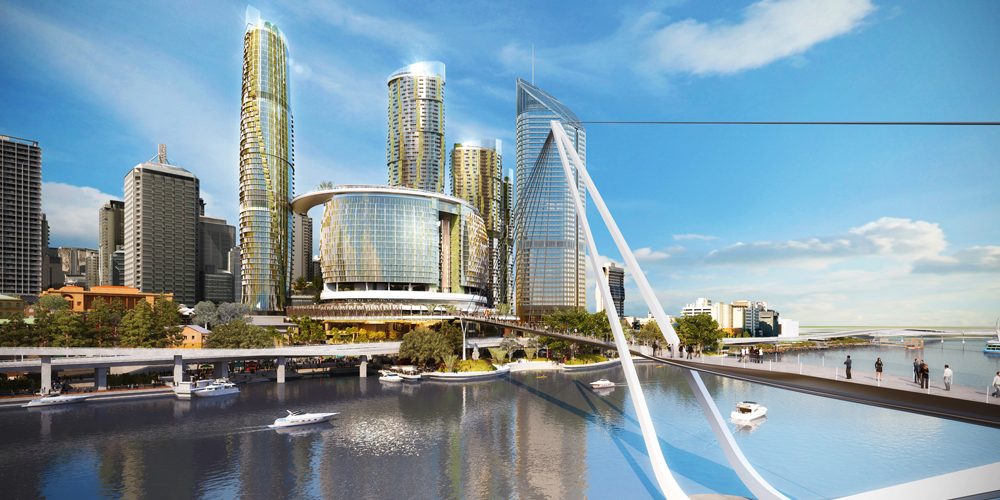 Forget what you know about Brisbane – Celeste Mitchell uncovers why the Queensland capital has earned its stripes as the new gateway to Australia.

Thirty two years ago, World Expo 88 transformed a derelict industrial zone opposite Brisbane’s CBD into a waterfront playground. These days, it’s known as South Bank. It hugs the Brisbane River with its stretch of parklands, Australia’s only inner-city beach, cultural precinct and slew of restaurants and bars.

Sitting waterfront at Stokehouse Q with a plate of fresh oysters or wandering through an exhibition at QAGOMA, it’s hard to imagine this buzzing precinct not existing, so ingrained is it in the fabric of Brisbane. “It really showed the city how we could turn and face the river. Up until then we really hadn’t faced the river,” says Tourism and Events Queensland CEO, Leanne Coddington. Now the river city is experiencing another age of change. Long overshadowed by its seemingly more sophisticated east-coast siblings, Sydney and Melbourne, Brisbane has turned the tide in the past decade, and now the world is turning its attention to Queensland’s capital.

Like a high-school friend you haven’t seen in 30 years who turns out to be a supermodel or the founder of Tesla, visitors are quickly realising Brisbane hasn’t just matured; it also now provides the easiest – and friendliest – welcome to Australia and confidence has soared, with an unprecedented line-up of developments, upgrades and Australia-firsts. The biggest change-maker is a strip of tarmac. A second runway for Brisbane Airport will open in mid 2020, instantly doubling capacity and allowing it to handle more flights per hour than the likes of Singapore’s Changi and Hong Kong International without a curfew.

Following in its jet stream, a new Port of Brisbane cruise terminal has been announced, which will welcome mega-liners to the city. And developed by Destination Brisbane Consortium, a joint venture between lead partner – The Star Entertainment Group – and its two Hong-Kong based partners, Chow Tai Fook Enterprises and Far East Consortium, and expected in 2022, South Bank will be complemented with the opening of the $3.6 billion Queen’s Wharf Brisbane. This slightly forgotten pocket of the CBD will morph into Brisbane’s hottest new precinct. There will be more than 1,100 premium hotel rooms operating under new brands to Brisbane, including The Ritz-Carlton, as well as 50 new restaurants, cafes and bars.

Far from being just a cluster of skyscrapers, though, plans have also been laid for 12 football fields-worth of public space, and – the crowning glory – an open-air Sky Deck perched 100 metres above the ground. “With the catalyst of the second runway, the cruise terminal, Queen’s Wharf Brisbane – it’s the next generation to take the city again to that next level,” Coddington says.

“Brisbane is a beautiful city in its own right, but if you take a 100-kilometre radius north, west and south – and to a degree east if you include the sand islands (Moreton and North Stradbroke Islands) – there’s this amazing experience that Brisbane is at the heart of,” Coddington says. It’s never been easier to fly from Asia and leapfrog straight to the Great Barrier Reef or the Australian outback, with new Alice Springs flights the latest domestic-route coup. Still, with so much on offer in the shape-shifting Brisbane CBD, it would be remiss of travellers to head straight for the transfers line.

“I thought I’d miss so many things in Sydney when I left, but to be perfectly honest I reckon I do more in Brisbane than I ever did in Sydney because I can do it easily,” Alroe says. “It’s not little ‘country cousin’ Brisbane anymore, it’s a city that’s very satisfying. And that’s deepened and widened and matured in the past nine years, to the stage where you almost can’t remember that things haven’t always been like this.”

Love wood-fired pizza? So do we, so much so that it’s a speciality at a few of The Star’s signature restaurants around Australia. We consulted the top chefs from these venues for their tips on cooking wood-fired pizza...

One part of the sister trio behind The Star Sydney’s favourite florist, Floral Desire Studio, shares her top tips to creating the perfect flower centrepiece. Meet Olivia, Trish and Danielle, the sister trio who own and...