Every year on July 14, the French celebrate Bastille Day, a national holiday that commemorates the start of the French Revolution. It’s tradition to take the day off and revel in everything that makes France great, including its fabulous food.

While Bastille Day isn’t a holiday here in Australia, it’s a perfect excuse for us to sample some traditional French dishes. Here three of our chefs share their favourite recipes.

Fox has developed his own version of a French breakfast, which is a perfect treat for Bastille Day – over-the-top French toast.

“It’s more of an homage to Elvis than a classic Parisian café dish,” he admits of the meal, which uses English muffins rather than bread for a pancake-like texture. “It’s quite different to anything you may typically associate with French toast, but it’s a special treat I think people will enjoy. The peanut butter, banana and blueberries create an awesome flavour combination, and when you top it with bacon and maple syrup, you’ve got a dish that will make anyone smile.”

2. Slice the English muffin in half. Spread peanut butter on one side of the muffin and blueberry jam on the other side.

3. Cut the banana into slices and then place onto the muffin.

4. Soak the muffin in the egg mixture for 5 minutes on each side.

5. Meanwhile, cook the bacon on a medium heat. Add a dash of maple syrup and let the bacon soak it up, then remove from the pan.

6. Melt the butter in the pan. Add the muffin and cook for 2-3 minutes on each side.

7. Plate it up and add the bacon, plus extra banana, jam, peanut butter, crème fraiche, icing sugar and maple syrup to garnish.

When Chris Mcleay thinks of French cuisine, he thinks of rich, wintery dishes that are full of flavour. His all-time favourite French dish is called tartiflette. “It’s basically boiled potatoes with smoked bacon, sautéed onions and a strong, punchy cheese,” he explains. “It’s a really enjoyable accompaniment to a roast dinner.”

1. In a pot, boil the potatoes until tender. Allow them to cool before cutting them into 5cm thick slices.

2. In a separate pan, sauté the bacon and onion for several minutes, until the flavour has had a chance to release.

3. Add the white wine to deglaze (this gets all the flavour from the bottom of the pan).

4. Add the potatoes and toss, allowing the onion and bacon to mix with the potatoes. Season with salt and pepper to taste.

5. Add the mix into a baking dish and cover with the shaved cheese.

6. Bake in an oven for 10 to 12 minutes at 180˚C, or until the cheese has melted through the potatoes. Serve piping hot!

During a visit to Paris he will never forget, Hartill-Law and his wife visited a wine bar called L’avant Comptoir, which served “whimsical but utterly delicious things like confit duck hot dogs.”

Hartill-Law was most captivated by a dish called boudin noir macaron with sauternes gel, which for those who don’t know is a black pudding macaron with a white wine jelly. “I’ve replicated it multiple times since that visit because it’s just so delicious. It’s a bit elaborate, but I think it’s a great weekend cooking project and it will really impress friends.”

For the Sauternes gel

For the boudin noir

1. Preheat your oven to 200˚C. Line at least 2 baking trays with baking paper.

2. Sift the almond meal and icing sugar together in a bowl.

3. Add the fresh egg whites to create a paste, mixing until well combined. Cover with plastic wrap and set aside until needed.

4. Add the sugar and water to a saucepan over low heat, stirring until the sugar has dissolved. Increase the heat to medium-low and slowly bring the mixture to a boil.

5. Meanwhile, using an electric mixer, beat the old egg whites and powdered egg in a bowl until combined. Reduce the speed to medium and slowly add the sugar mixture. Beat until thick and glossy and the mixture is cool.

6. Fold the glossy mixture into the almond paste until combined. Spoon into a large piping bag fitted with a 1.5-2cm nozzle.

7. Pipe each batch of macarons into 3-4cm circles. You will make enough macarons to fill 6 trays, so you may want to do this in batches. Leave the trays on the bench for at least 30 minutes so that the macarons form a crust.

9. Remove the macarons from the oven and set aside to cool for 5 minutes. Transfer to a wire rack and allow to cool completely.

For the Sauternes gel

1. Place the Sauternes in a pan and bring to the boil before adding the water and agar agar. Allow the mixture to boil for about 3 minutes.

2. Remove from the heat and place in a container to refrigerate for 1-2 hours, until the gel is fully set and cold.

3. Place the gel in a blender and puree until smooth. Then set aside until you’re ready to serve.

For the boudin noir

1. Cut the black pudding into 3cm rounds that are approximately the size of a macaron.

2. Sauté in a fry pan with a little oil.

3. To serve, add a dollop of the Sauternes gel to the plate. Then top with a macaron and a slice of boudin noir. 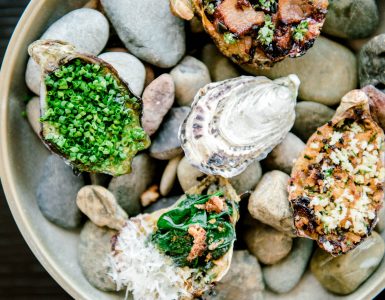 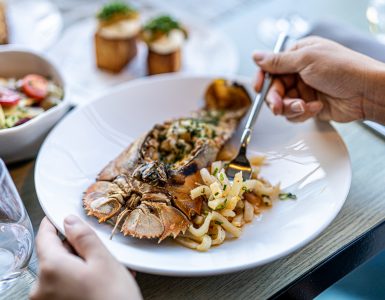 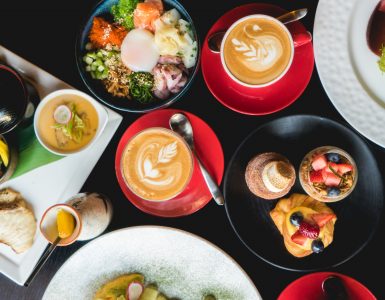 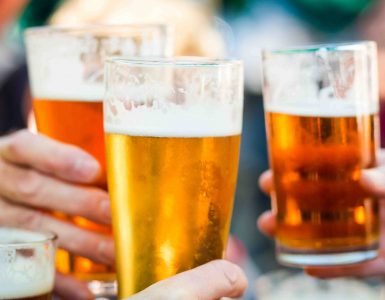 Ever seen a 45-day dry-aged steak on the menu and wondered why everybody is banging on about old beef? Meat master and executive chef of Nineteen at The Star Uday Huja explains everything you need to know about dry-aged... 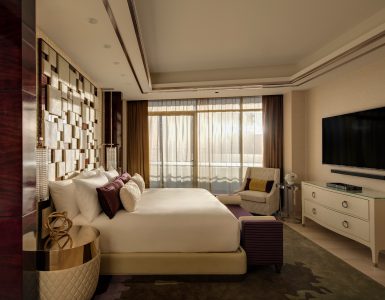