Star-Crossed: The Melbourne Couple Who Found Love At The Star Gold Coast

Even if you’re not a romantic at heart, you must admit there’s those certain special love stories that make you go weak at the knees. This is one of those stories…

For Melbourne couple, Hugh and Zandra Schiavello, life couldn’t be sweeter. After a mega marriage proposal in July 2019 on one of the Gold Coast’s most beautiful stages involving a faux singing audition and a balloon extravaganza – and a fairytale wedding and reception, the couple are now happily married and living their best lives.

One of the sweetest things about this couple’s story is their dual love affair with The Star Gold Coast. The venue played centre stage for the couple’s marriage proposal, wedding and reception. We caught up with Zandra to get the lowdown on her Star-crossed love story.

The Star Gold Coast is a well-loved, nostalgic place for Melbourne-born Zandra, that she and her family have visited countless times since 1995. “For the last 25 years, The Star has been a holiday destination we would come to nearly five times a year,” shares Zandra, adding “it has always been known as my happy place”.

“Every year we would eagerly wait for school holidays knowing we would be going to The Star and would get to smell our favourite smell in the world: the lobby scent.”

In July 2019, Zandra’s husband-to-be, Hugh, arranged for Zandra to attend a faux audition at The Star Gold Coast’s stunning theatre. The audition was for a residency singer at The Star and was arranged in partnership with the couple’s favourite concierge staff member, Rob Luker. As a full-time singer and songwriter who’d taken to the stage for numerous corporate and media events, launches and galas around Australia and the US, this audition was nothing out of the ordinary for Zandra.

“As I stepped onto the stage, all the lights in the seats were down and the curtains remained shut,” tells Zandra. “Little did I know, Hugh was waiting in the wings, nervously awaiting me to finish my song. After I finished singing, the curtains opened, the lights went up and across the whole back of the stage I saw in balloons ‘WILL YOU MARRY ME?’” (The answer, of course, was ‘yes).

The Star Gold Coast’s theatre is an icon in itself. The venue caters for more than 2000 people, however for Zandra’s wedding day, she and her bride squad had it all to themselves. “I always knew I wanted to go back to the exact theatre where Hugh proposed to me to get dressed and ready,” says Zandra.

“On the wedding day, as I put my dress on, I remember looking out [from the stage] and feeling like everything had come full circle. From a little girl fantasising about being on the stage, to then singing on the stage, proposed to, and now putting my wedding dress on… It was very sentimental.”

So much planning goes into a wedding, and for Zandra and Hugh no stone was left unturned. Zandra wore two beautiful wedding dresses by Alin Le’ Kal, shoes by Gucci, a crown by Jeanette Maree, make up by Patricia Gangemi and hair by Bo & Co Hair studio. Luxe Designs & Events took care of the styling and set up, with flowers by The Lush Lily.

The big day finally came on March 7, 2021, and it couldn’t have come soon enough in Zandra’s eyes. “We had 100 of our family and friends fly up from Melbourne and stay at The Star Gold Coast for the wedding,” tells Zandra. “Walking down the aisle to my groom, I felt like I was in a bubble. I stared straight into Hugh’s eyes the entire time. There wasn’t a dry eye in the church. It was a moment that will stay with me forever.”

Do you have your own love story at The Star? We’d love to hear your stories via Instagram.

Holiday living has become a permanent reality at The Star Gold Coast with the opening of The Star Residents. So, here’s a guide on how to get the best of both worlds for your next trip. Designed to meet the needs of... 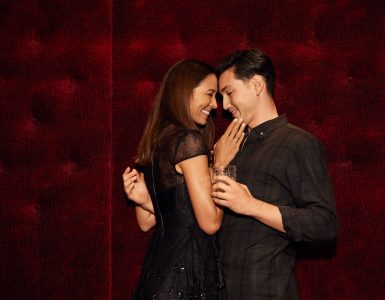 Love Me Tender With A Romantic Weekender. How To Have An Unforgettable Valentine’s Day At The Star Sydney

Valentine’s Day – the day we can be unapologetically mushy, loved-up and embracing our inner Romeo (or Juliet). At The Star, you can do just that, with our romantic weekend away. The last two years have seen us cancel...